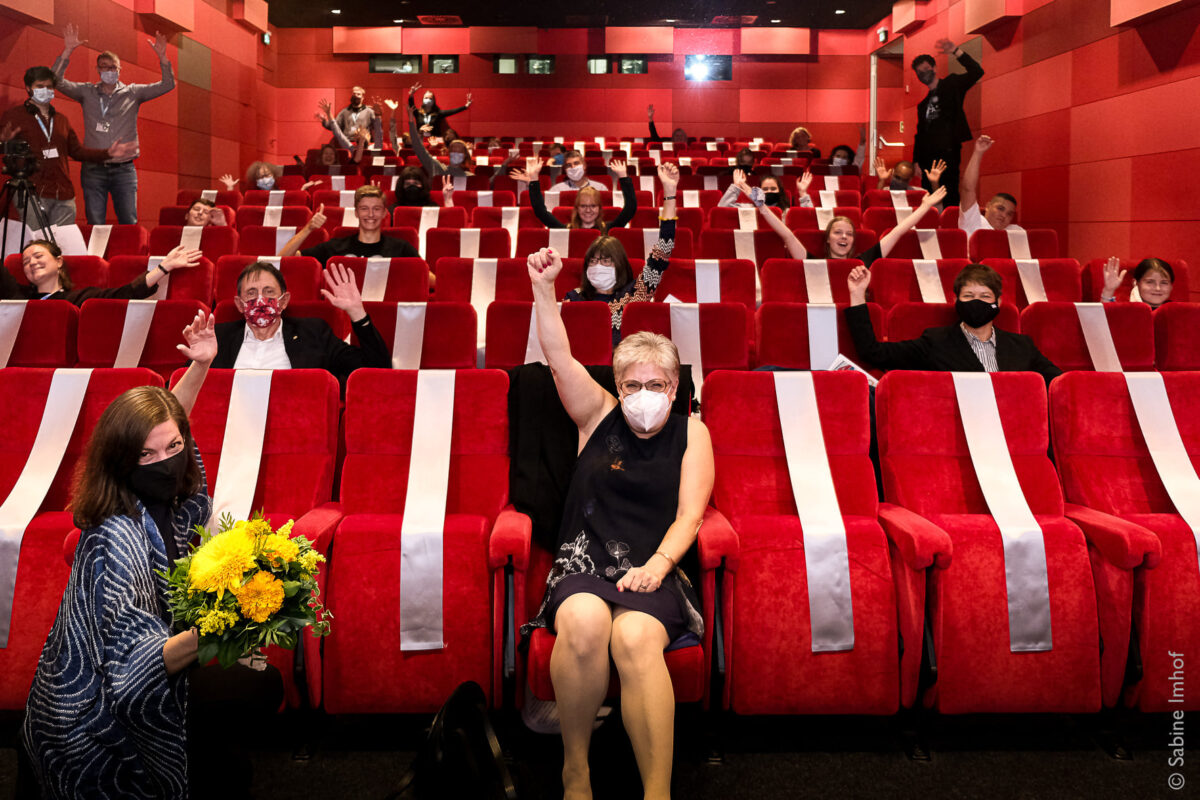 The winners have been chosen! MARONAS FANTASTIC TALE, DAYS OF THE BAGNOLD SUMMER and ECSTASY are Best Feature Films at LUCAS #43. Check out all winners and the most memorable pictures of the evening in the gallery. 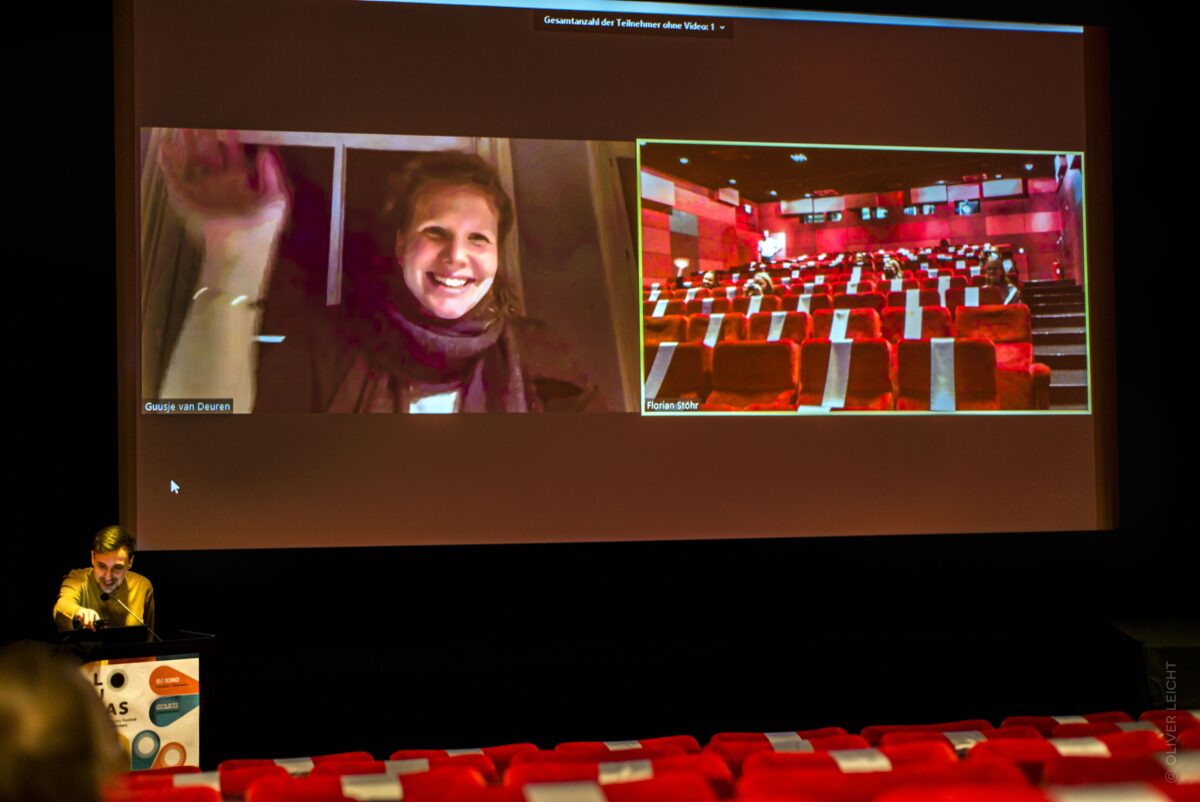 No, this is not a goodbye yet! This is a cinema greeting from producer Guusje van Deuren of the competition entry ABOUT THAT LIFE, which had its German cinema premiere at LUCAS on festival Wednesday, day 7. When the eventful festival week of LUCAS #43 comes to an end today, day 8, we would like to express our sincere thanks to the filmmakers all over the world who give children and young people a voice with their outstanding works. Thank you very much for your great films! See you at the awards ceremony, and the Jury 13+ is already taking you on a journey through the LUCAS Instagram Story 🎬 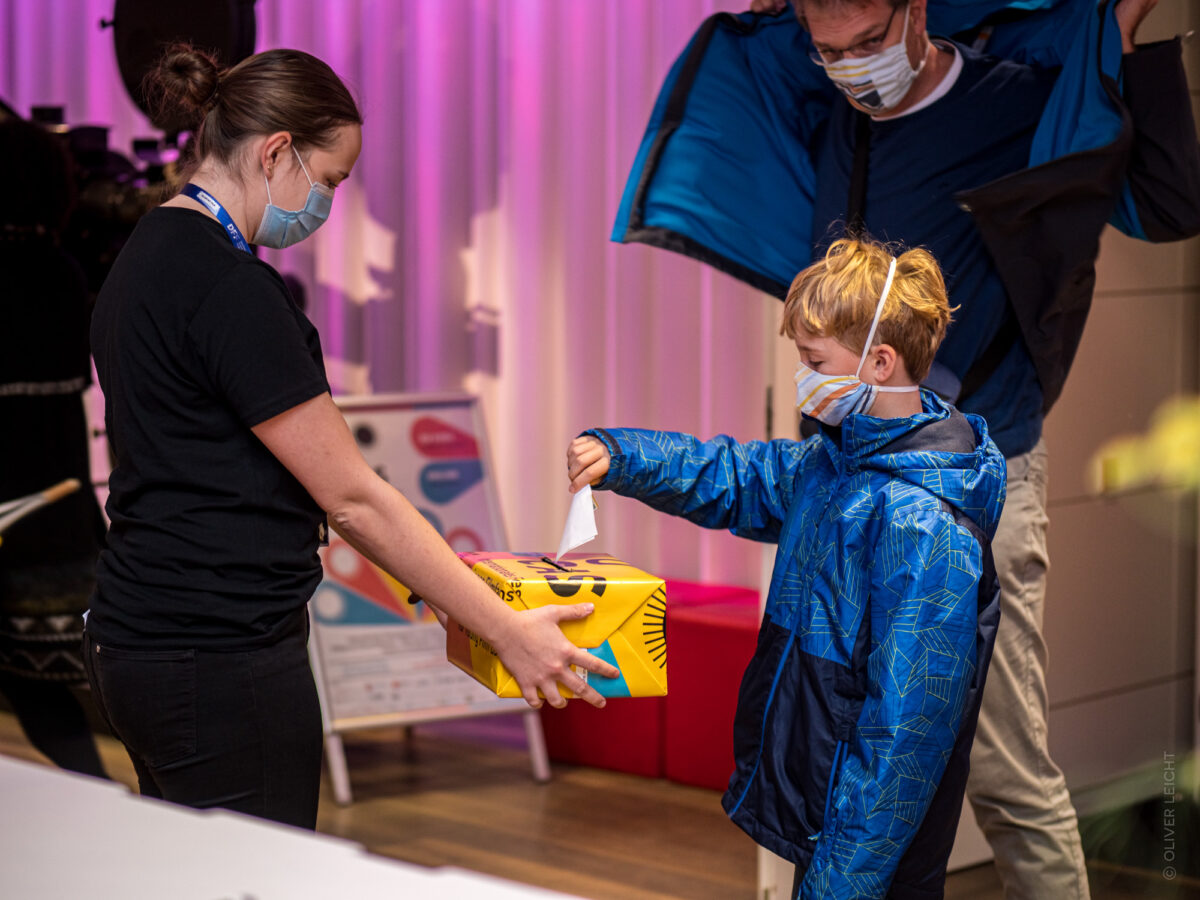 Digital Film Education in Europe: What experiences and insights has the Corona year brought? LUCAS discussed this with colleagues from the DFF Frankfurt, the Cineteca di Bologna, and the Taartrovers Festival Amsterdam, among others. The experience in cinema is definitely different this year. But film education and exchange did not come off badly on day 6 of LUCAS: The young people of the FBW Youth Film Jury presented LOS LOBOS to the audience and discussed with director Samuel Kishi about his cinematic idea and his childhood between Mexico and the USA. To MILLA MEETS MOSES the Australian director Shannon Murphy brought a surprise guest, her daughter 🙂 All the while, votes for the audience award are still open in the cinema and online!

With the wondrous paper figures from the short film of the same name, director Alexander Feichert (Bild) brought children very close to how moving images come to life for the world premiere at LUCAS. And not bad: Let the cinema projection start on their own call.

A point of honour for the youngest kita visitors, who rang in the colourful LUCAS Minis films in the morning with a loud “Fiiiiilm aaaaaaaaaaaaab!” In the early evening, young people took over the direction in the cinema hall and gave an insight into the intercultural DFF film club “Blickwechsel Jetzt” with their favourite film CRY BABY.

The older audience joined in the evening and exchanged views with director Mario Piredda about his German premiere in the 16+ | Youngsters Competition, THE LAMB, in a live cinema discussion via Zoom.

Half time at LUCAS, but the members of the Youngsters Jury (first picture) haven’t had enough of cinema yet, and they don’t have to! LUCAS has a programme for young adults every evening. During the day, Sunday belonged to the children. Films for the whole family and great guests like the directors Anca Damian from Romania and Daniel Rezende from Brazil came directly to the cinema screen via zoom conference. Today, LUCAS team member Katharina reveals what the festival looks like behind the scenes in the Instagram Story.

Start of the weekend at LUCAS: in the morning, the children of the LUCAS Klassiker.Klasse presented the cult Disney film DORNRÖSCHEN to their peers in the cinema, exciting! A festival highlight at noon: the celebration of the 50th anniversary of the Bundesverband Jugend und Film, with muffins, soda and lots of film fun. Also in Wiesbaden the motto was “Get involved! Young presenters Aki and Paul welcomed director Kim Strobl and actor Vinzenz Schreyer to the screening of the sports adventure MADISON, hopefully before the film is released in German cinemas very soon. For the Youngsters Jury the modern adaptation ANTIGONE was on the programme, with Instagram take-over.

Film talks on all films in the competition can be found on the LUCAS website and on YouTube.

Premiere feeling on day 2 of LUCAS: In the MINIS section, the MiniFilmclub of the DFF accompanied the youngest film fans aged 4 and over on their perhaps very first visit to the cinema. The short films BANDSALAT and IN GERMANY celebrated their German cinema premiere as well as the feature films MY FAMILY AND THE WOLF and IN MY BLOOD IT RUNS in the LUCAS competition. In the middle of all this were the up-and-coming critics of the LUCAS Critics’ Window, whose reviews will soon be available on the LUCAS website.

Another premiere: the initiative “the special children’s film” gave its Hessen kick-off in a digital information event at LUCAS. The cinema is alive!

LUCAS is opened! For eight days we celebrate cinematic art for everyone with you in the cinema and online.
Thank you for the wonderful starting greetings by Sybille Linke (City of Frankfurt am Main) Anna Schoeppe (HessenFilm und Medien) and the introductory words by Ellen Harrington (DFF) and LUCAS festival director Julia Fleißig. The perfect kick-off was given by the fully booked opening film GLITTER & DUST with director duo Anna Koch and Julia Lemke. More of that, let’s go! 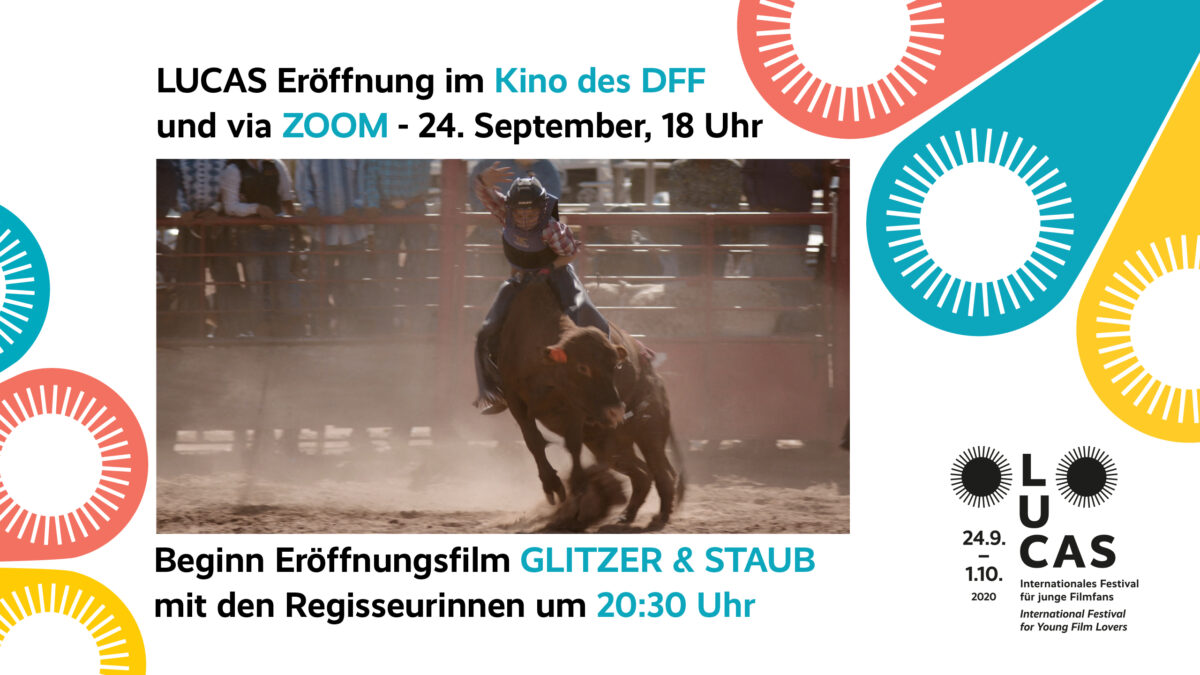 Insights into the program, film excerpts and greeting addresses by:

Follow the opening from the comfort of your home via zoom conference. Get the zoom link via lucas-info@dff.film

Afterwards, the German documentary GLITTER & DUST will open the competition program of LUCAS #43 at 8:30 p.m. in the presence of the directors. Secure your video-on-demand tickets now! Click here for the film 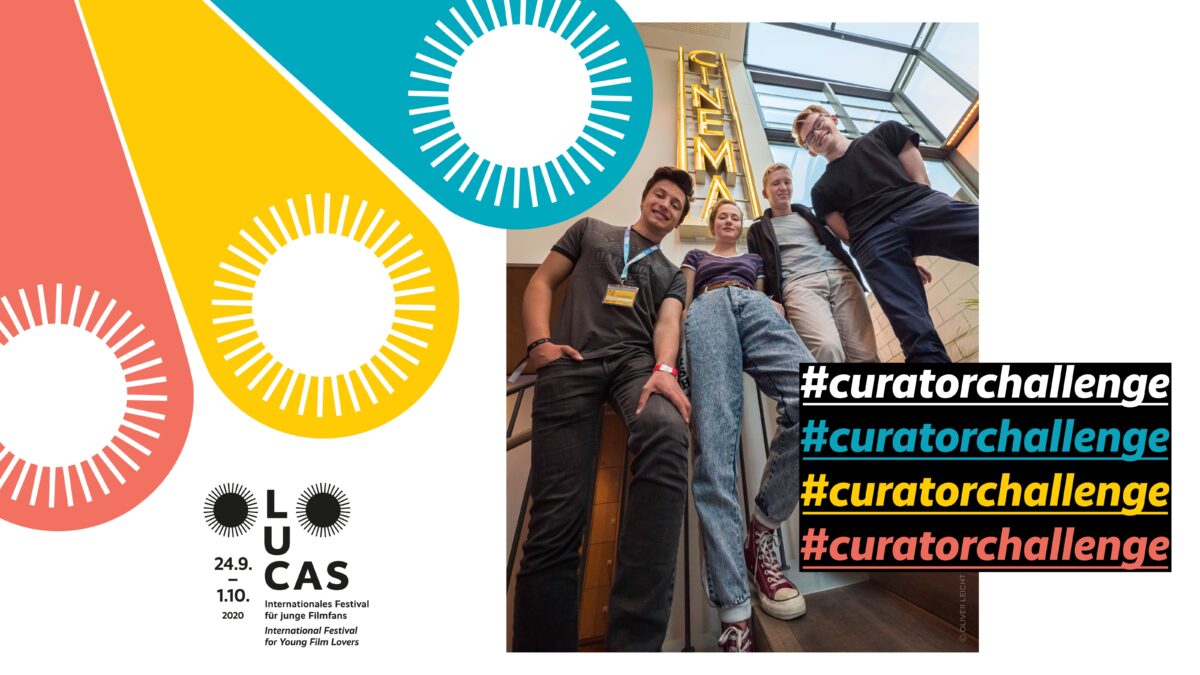 Join the #curatorchallenge and become junior film curator at LUCAS!

One topic – three film recommendations! The LUCAS #curatorchallenge calls on young film lovers aged 16+ from across Europe to send us video messages with up to 3 film recommendations on a topic you care about. Win the chance to take part as junior film curator in the Young European Cinephiles project 2021.

Simply send your personal watchlist on a topic of choice until October 1 in a short video message to bitter@dff.film.

The #curatorchallenge offers all participants the chance to become a young curator for LUCAS 2021! As part of the Young European Cinephiles 2021 you will create your own festival film series in the cinema in teamwork with other film-loving young people from Europe at LUCAS #44.
Let’s get started!

What is the topic that is most important to you right now?
Which three films shed light on this topic particularly well and why?

Grab your mobile phone, introduce yourself and your three top titles on an exciting topic of your choice and start with your short video (max. 2 min)

To: bitter@dff.film (Wilke Bitter)
The deadline for submissions is 1 October 2020.

The contributions will then be published on the LUCAS website and in social media.